Take a look at Official Community Plan Bylaw No. 2240

Thank you to everyone who got involved in the OCP update over the past two years. While initial public engagement from 2020-2021 informed the development of the draft OCP, community input continued to be a critical factor in refining the draft OCP following its introduction earlier this year on February 28th.

If you’d like to see the substantial changes that have taken place since that time, check out this list of Council resolutions outlining specific changes that were made to the draft OCP over the past four months. You can also look back at the February 28, May 5, May 30, June 13, and June 27 Council meeting minutes or video for further details.

An OCP is a Town bylaw that sets out the broad objectives and policies that guide decisions on planning, land use and provision of municipal services in the community. It also establishes a degree of certainty about the location and nature of community change to residents and landowners while providing a framework for guiding and managing future development and growth. The process to update Sidney’s OCP took two years, spanning 2020 to 2022.


Want to find out more about the project?

Listen to Corey Newcomb, the Town's Senior Manager of Long Range Planning, on Radio Sidney's Peninsula Affairs show, discussing the project and how the community can get involved. Click here to listen to the recording.

Planning staff continued to engage with community members on the project, meeting with various community groups and strata councils regarding the project. 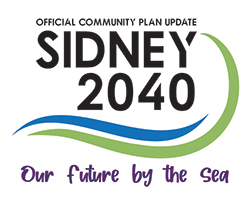