Louis-Marc Simard grew up in Jonquière, Québec a small city located 215 km north of Quebec City. During the 1980’s he took an adventurous ski trip to the Canadian Rockies and decided to stay in Western Canada. He went on to gain his undergraduate degree from the Emily Carr Institute while living in Vancouver.

A multi-media artist who sculpts and paints, Lous-Marc’s work is mesmerizing, colourful and fun, combining reality with abstract. He likens his own work to that of Russian, expressionism and abstract artist Wassily Kandinsky who lived between 1866 and 1944. Having never seen Kandinsky’s work prior to developing his own style, Simard remembers discovering the Russian artist and thinking, “someone else who paints like me”. There are definitely very distinct similarities between the two artists work.

Simard’s career as an artist was a natural progression. For as long as he can remember, he has always been drawing forms. He explains, “I guess I’m trying to play god and give my forms life, make them somehow plausible.” In his work, he strives to entertain the viewer, to take them somewhere near, not very far, but not entirely real. And like all people, he craves to be told he’s good.

A walk along the Sidney Sculpture walk and a look at Simard’s piece, The Muse, will undoubtedly garner the praise the artist seeks. The piece is more than good. It is fascinating. Created with smooth, white marble and stainless steel, Simard describes it as an individual carrying a burden on their shoulders.  But the burden actually becomes the arms, making it an analogy for the baggage we all carry through life and how it can become an asset.

In January of 2014, Louis-Marc started a new venture and creative direction in his life. He opened The Cube Hotel & Hostel in Revelstoke. He describes it as a “boutique hostel”, a hybrid that is more than a usual hostel but less than a hotel. The facility is located in a former lumber supply warehouse and has an atmosphere of clean simplicity while bringing the artist’s personal flair into the building. The exterior design is inspired by Dutch abstract artist Piert Mondrian’s composition but uses Simard’s own colour scheme.

Louis-Marc currently lives in Revelstoke and maintains a studio in Salmon Arm, BC. 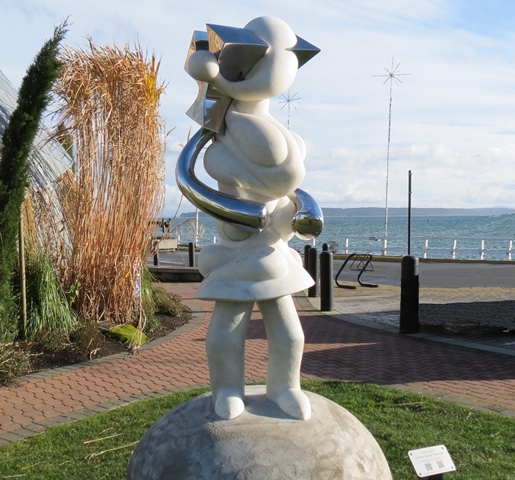 The Muse on the Sidney Sculpture Walk