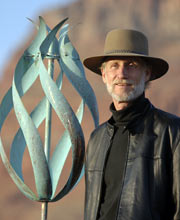 Lyman Whitaker’s masterfully made wind sculptures are mesmerizing, functional, creations that combine beauty with purpose. Each piece is beautifully and soundly engineered to withstand the elements providing year-round, outdoor art that is constantly moving. His piece, Double Spinner, on the Sidney Sculpture walk, is made of Copper, stainless steel and steel. It stands just less than 17 feet tall and entertains residents of nearby residences as the wind moves its petal-like disks in seemingly opposing directions.

Lyman earned a Bachelor of Fine Arts from the University of Utah in 1976 and has been sculpting for over 40 years. He has developed a unique style and knowledge of materials and their application. For 20 of these years he has primarily focused on creating kinetic art or wind sculptures which he has become internationally renowned for. As the foremost artist in wind sculptures, he is represented at fine art galleries around the United States as well as the Steffich Fine Art Gallery on Salt Spring Island. In addition, public and private installations exist in numerous locations around the globe, in over 30 countries.

As an artist, Lyman expresses his concern for the survival of the planet through a creative medium. His strongest wish is to have his artwork symbolize a move toward better solutions in relationship to the earth. This fascination with and concern for our planet led him to travel the world, including a 5-month stay in Antarctica in 1972, where he erected a huge sundial at the South Pole. A decade later he settled into his partnership with the wind. The international success of his kinetic works has allowed him to construct a well-equipped studio near Zion National Park in Utah. Where, together with his wife Stacy and brother John, he has built a creative partnership based on complementary talents.

His most recent endeavour is a large, 42 piece project awarded by the City of Lancaster. The public art project will be located at the base of the new Thaddeus Stevens Bridge. The wind sculptures range between 14 and 34 feet tall and will be placed on each side of the street with the blades constantly moving at different speeds as they are propelled by the wind. The sculptures are scheduled to be installed this October or November and represent an amazing undertaking by this talented and celebrated artist 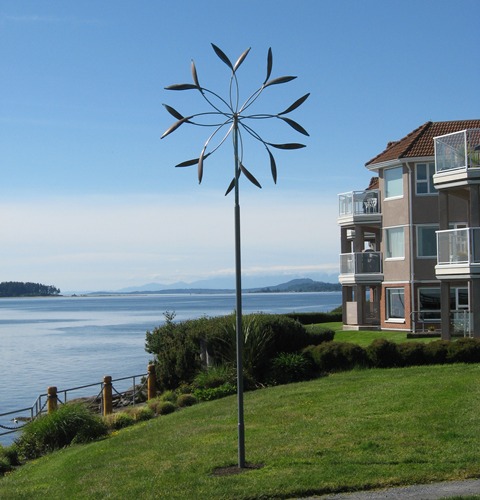