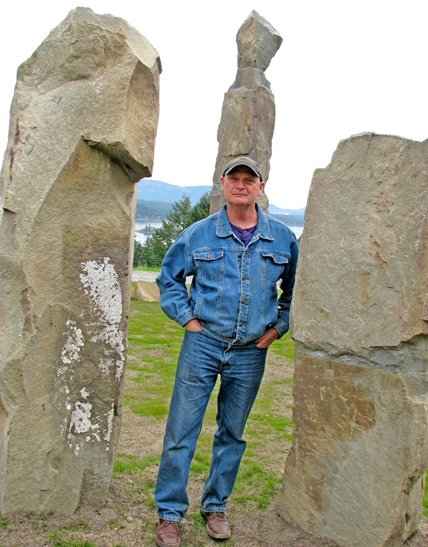 Ronald T. Crawford is a Salt Spring Island painter and sculptor whose ingenuity results in his workspace often resembling a construction site rather than an artist’s studio. His giant stone works require heavy equipment to acquire and move the massive stones that are used to create pieces such as the “Standing Babas”, reminiscent of the ancient Stonehenge in England. The end result is art in its rawest form.

Ronald studied art and art history at Red Deer College, University of Oklahoma, The Banff Centre and the University of Calgary. He also spent several years teaching and his work has appeared in numerous exhibits and galleries over the course of 30 years.

Stone sculpting began through a natural progression from Ronald’s commercial stonework of walls, patios and stairs. The move to creativity felt right and he began making pieces for art rather than pure functionality.

His Sidney Sculpture Walk piece, “The Keeper”, was designed specifically for the spot where it is located along Sidney’s waterfront promenade. Before building The Keeper, Ronald visited the site with the Town’s engineer and found the area littered with logs and debris from a storm that day. The engineer apologized and offered to find a different location but Ronald insisted this spot suited the piece. The Keeper, standing steadfast, represents a lighthouse or a welcome to the Anacortes Ferry. The bottom stone is a solid 5 ton, Salt Spring Island sandstone block selected to endure the harsh winds and crashing waves of the Salish Sea.

Ronald’s stone sculptures are about balance and risk. They are based on stacking stones, which he maintains; all people love to do. In fact, the last time he was in Sidney, he noticed someone had built several small stone stacks near The Keeper.

Ronald’s paintings have also been influenced by his stonework. They combine acrylic and plaster on board, a method that begins with sculpting plaster onto the surface of a board and then painting over this, giving the piece a 3D effect.

One of his most recent pieces is an 8.5’ x 13’ painting commissioned for the New Salt Spring Island Library entitled, Once upon a time. The painting was chosen through a competition from 100 entries. It incorporates the opening lines to 49 different novels that were influential to Ronald, so it can be read as well as viewed. Even the title is taken from James Joyce’s, A Portrait of the Artist as a Young Man.
Salt Spring Island has been home to Ronald for the past 25 years. It offers everything he needs as an artist. It is self sustaining and provides the materials he needs to create, artist groups for support and galleries to show and sell his work. Currently, the Duthie Gallery showcases his stonework and Steffich Fine Art Gallery shows his paintings. As a result he has been able to make a living and support his family doing what he loves. 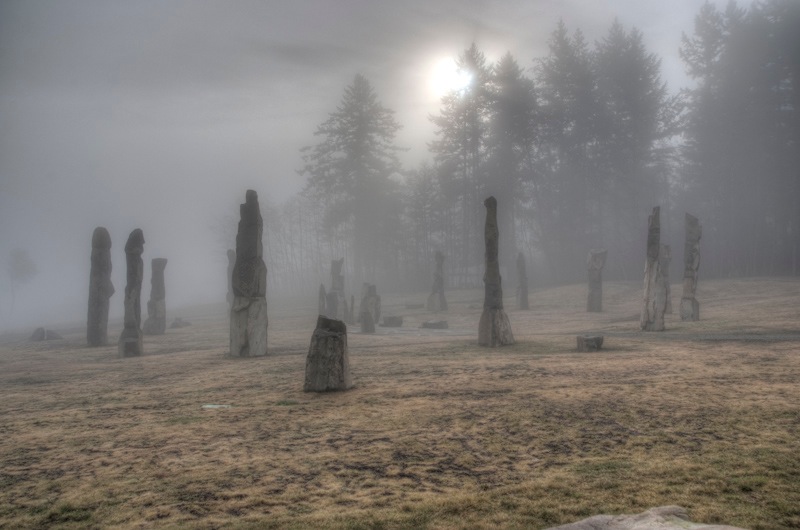 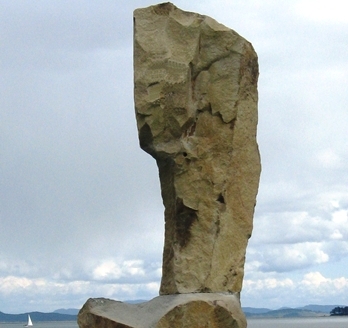