Sidney’s crest consisted of a shield centered with the sloop H. M. S. Plumper. On the upper left and right of the shield were two arrowheads with clasped hands between them. Above the shield was a flaming beacon and below it on a curved scroll the motto "PHARUS EXCLARARET NOS".

The arrowhead on the upper right was Salish while on the left the blue barbed arrowhead was from the Sidney family’s coat-of-arms. The clasped hands between them symbolized the friendship between the First Nations and the settlers. The beacon represented the one that formerly marked the rocks off Sidney and after which Beacon Avenue was named. A beacon can also signify knowledge and enlightenment. The motto translates "Let a beacon enlighten us".

In 1995 the Environment Advisory Committee proposed to Council that Bufflehead Ducks and Arbutus leaves be added to the crest as "supporters" to represent the natural environment of Sidney. The Bufflehead ducks symbolize Sidney’s position by the sea. Shoal Harbour Sanctuary, particularly Roberts Bay, is their primary winter habitat. The Bufflehead or "spirit duck" was also selected for vivacity and boundless energy. The Arbutus grows only in a small area along the southern B. C. coast and was a natural choice to represent the flora of Sidney. 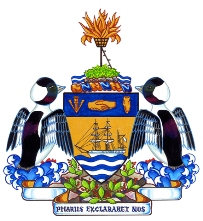 Sidney’s new Coat of Arms is a shield centered with H. M. S. Plumper below the two arrowheads and clasped hands on a band of blue with the torch above. On either side, a Bufflehead skids on the waves. Below the shield, the Arbutus leaves appear on a background of rocks. The scroll with the motto is now straight rather than curved. The colours are gold, black, white, green and blue.

On November 12, 1996, the Town's Coat of Arms was granted and sealed by the Chief Herald of Canada, of the Canadian Heraldic Authority, and entered into the Public Register of Arms, Flags and Badges of Canada.